Game Changers is a speculative exhibition that queers the past half-decade of popular games culture to form conversation about what games could be.
Games culture has been grounds for white heteronormative men to create harmful experiences towards marginalized groups since their inception due to their roots in industrial-military complex transductivity. The ideology of the magic circle's apolitical nature was instilled across the dominant culture. What could major video game commodities look like if they were used as active expressions of protest and representation? This was the question posed in my exhibition, "Game Changers" which was held December 11, 2018.
This ranged from Katamari Damacy being a frustrated protest game about gender performance to Ace Attorney: Phoenix Wright defending gay rights in court. For this project I utilized video editing, photo editing, and community mods.
What is performative about this one may ask? I never told any of the audience of the exhibition that it was all speculative fiction. Instead, I framed the entirety of the exhibition as a celebration of video games as form, inspired by museum exhibitions such as Smithsonian's "The Art of Video Games" and V&A's "#DesignPlayDisrupt".
The goal of this exhibition is not one to make people question the differences between what games are and what they should be. Instead it is a work that destabilizes the canon of games and play by effectively using erasure tactics that have created the heteronormative, patriarchal, white canon of today.
My hope is that Game Changers in its post-mortem can provoke thought about what the canon of games and play can look like.
Post-Mortem Design Document available upon request. With the project process below. 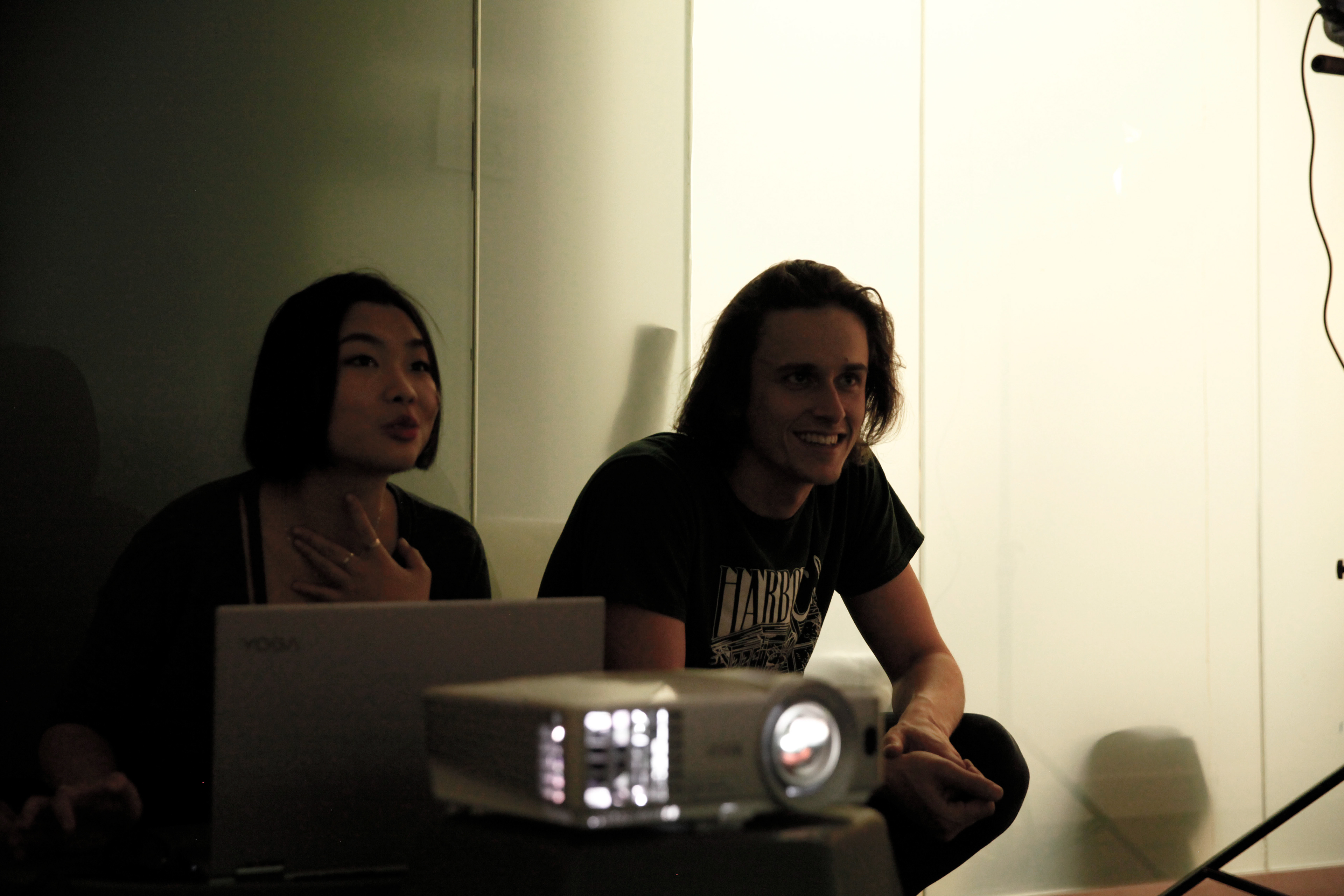 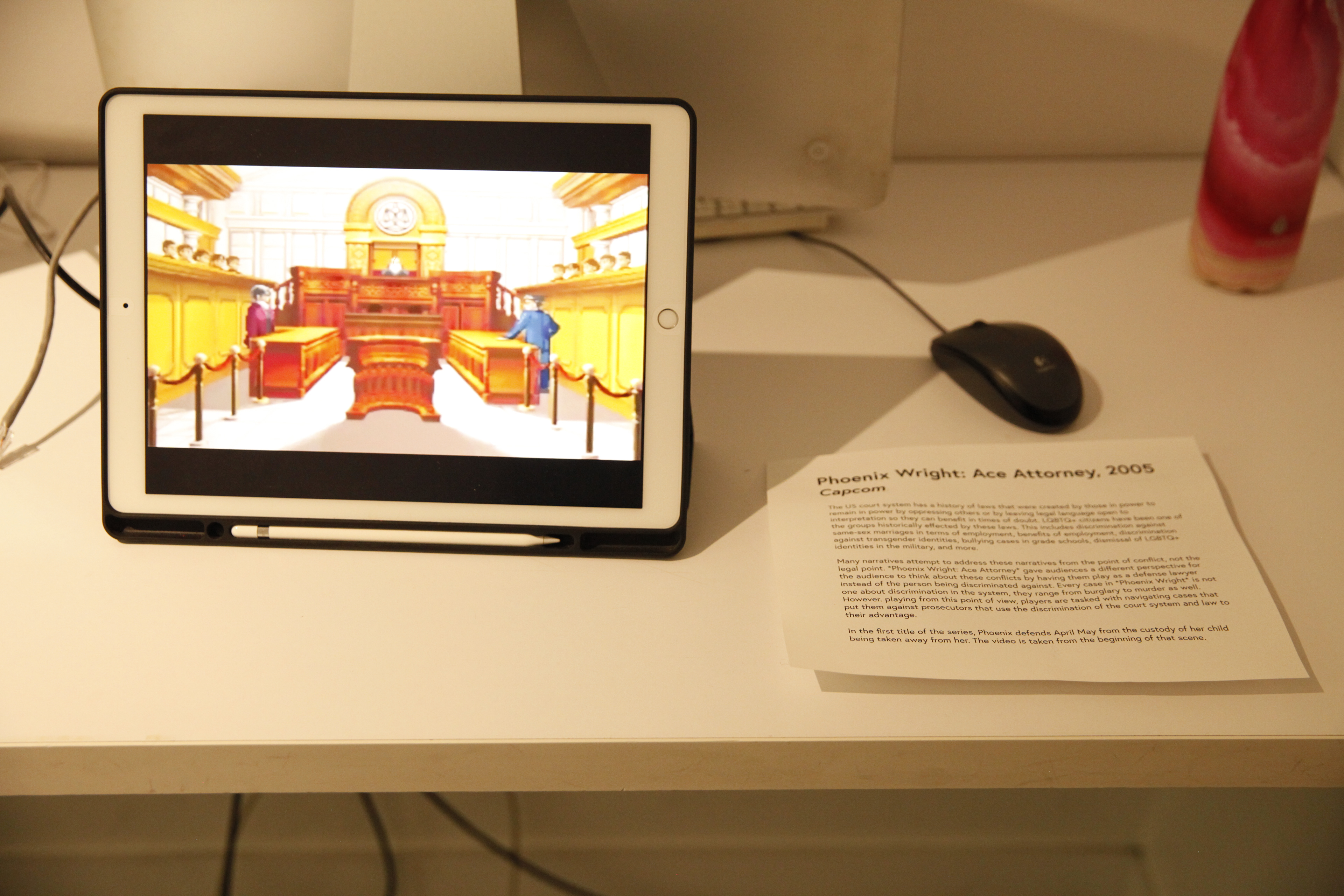 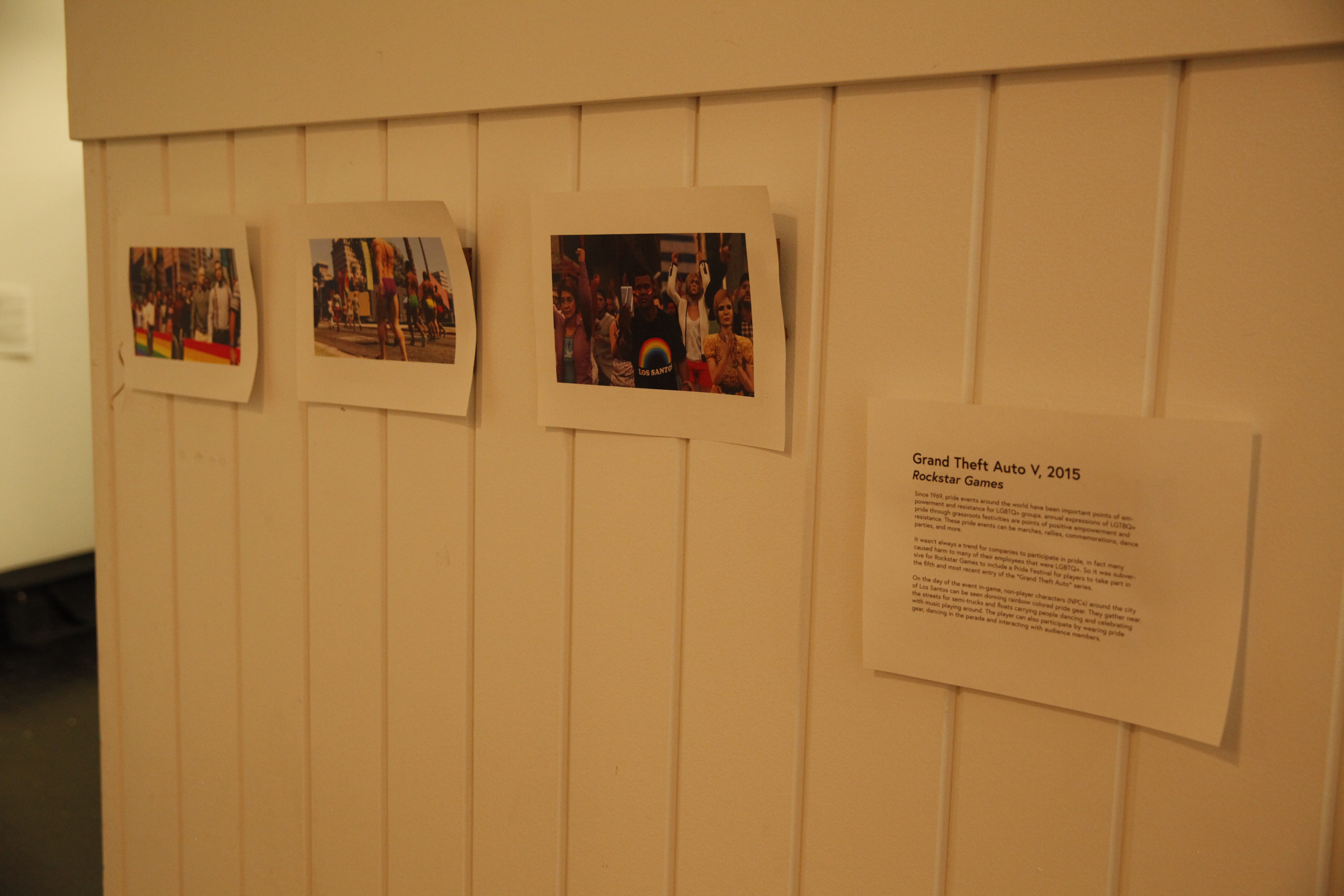 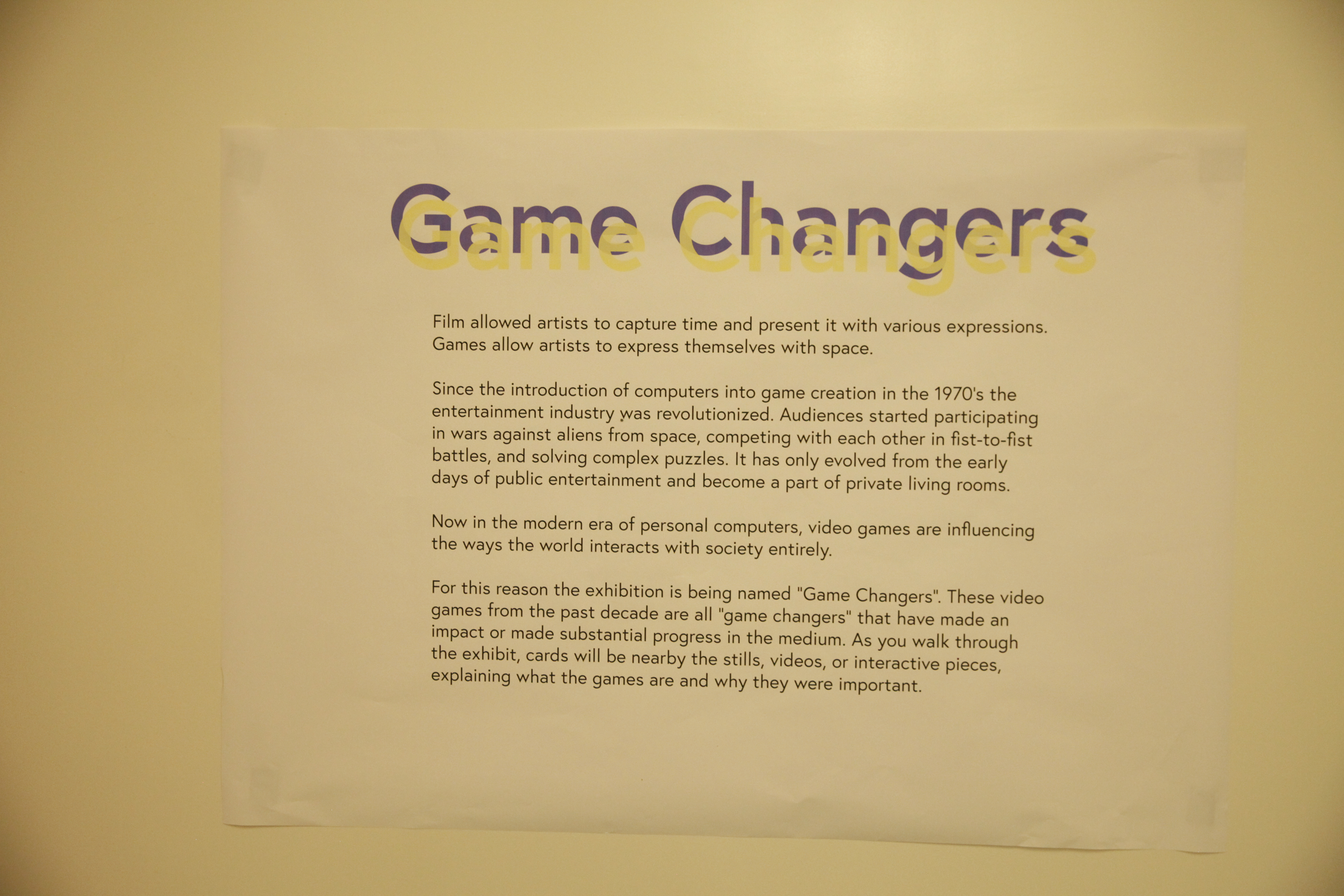 Development Process
Game changers is the first project in a series that was sparked by Sol LeWitt's wall drawings. When I saw Wall Drawing #289, I felt something different than other art. The direction written by LeWitt were no different than one of a game, and I could say this moment really created the course for a lot of the work I have done since.
At the time I was immensely fascinated by the concept of "games as artifacts". What would a game look like, if it was displayed as an art work, or historical item in a museum? Alongside this, I also very recently had attended a talk given by Mattie Brice about "counterfactual game histories", which helped me generate ideas for a project fairly quick. By combining my thoughts on games as artifacts, and counterfactual game histories, I could make my first attempt at putting games in a gallery/museum space. 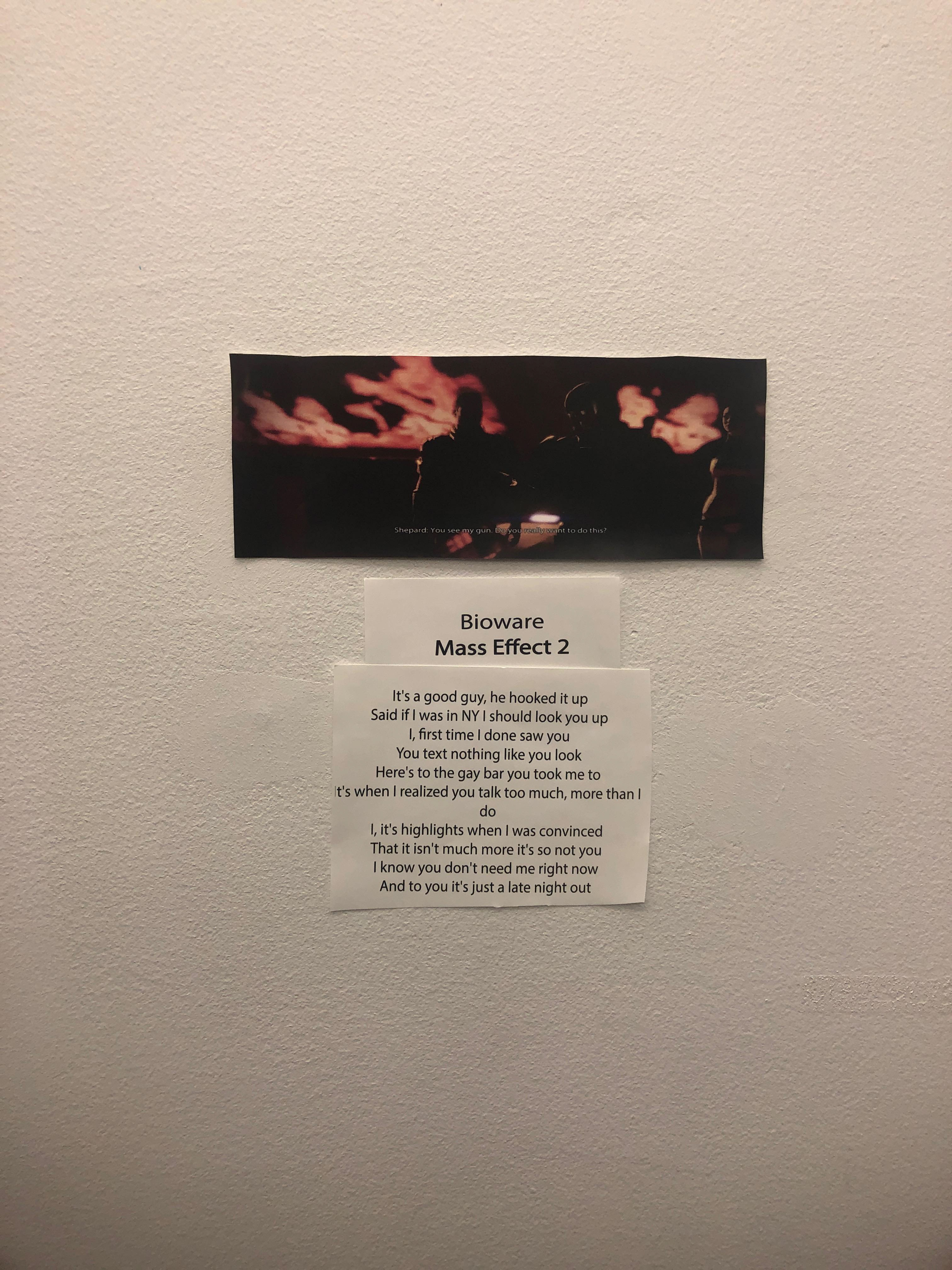 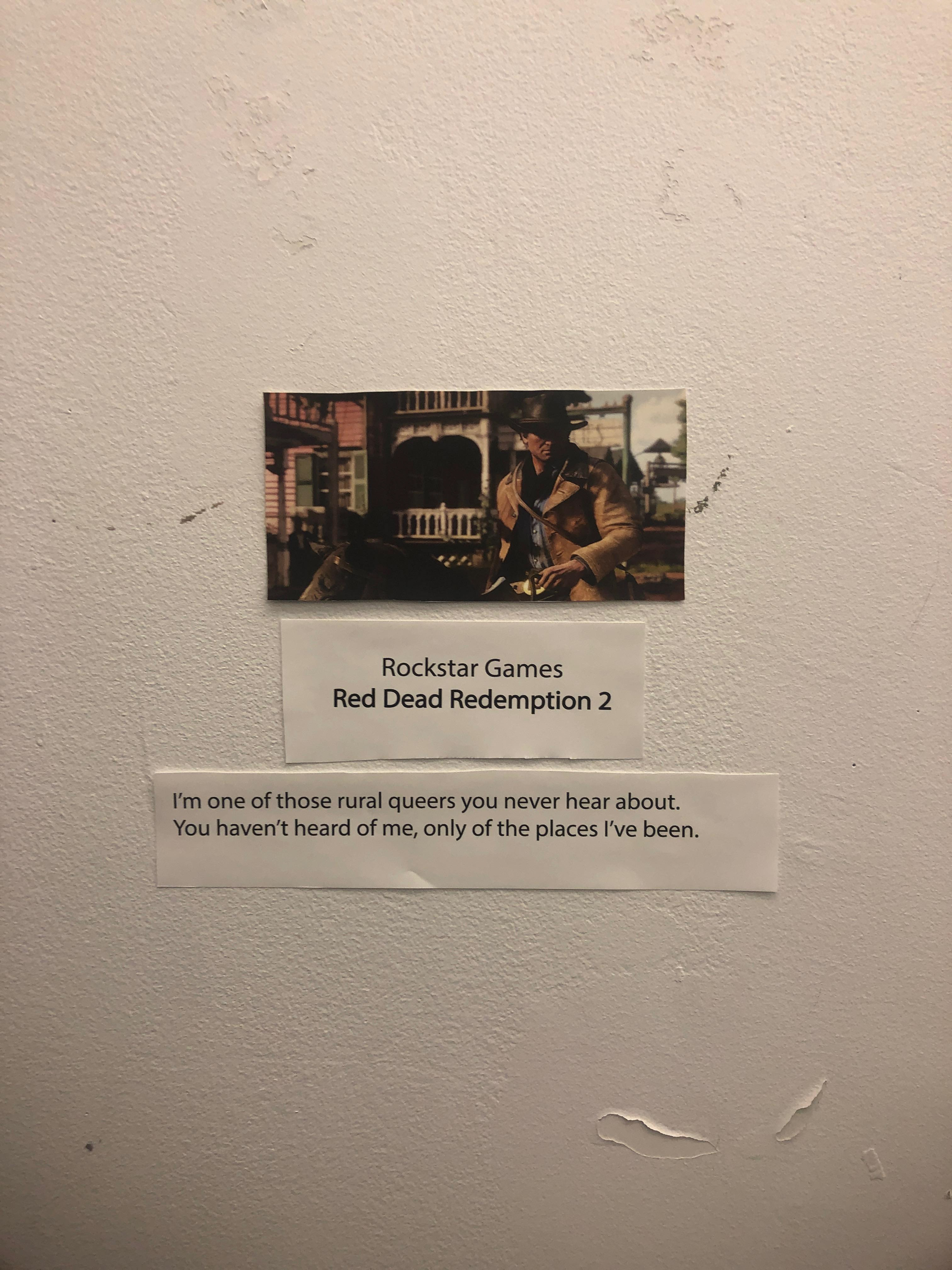 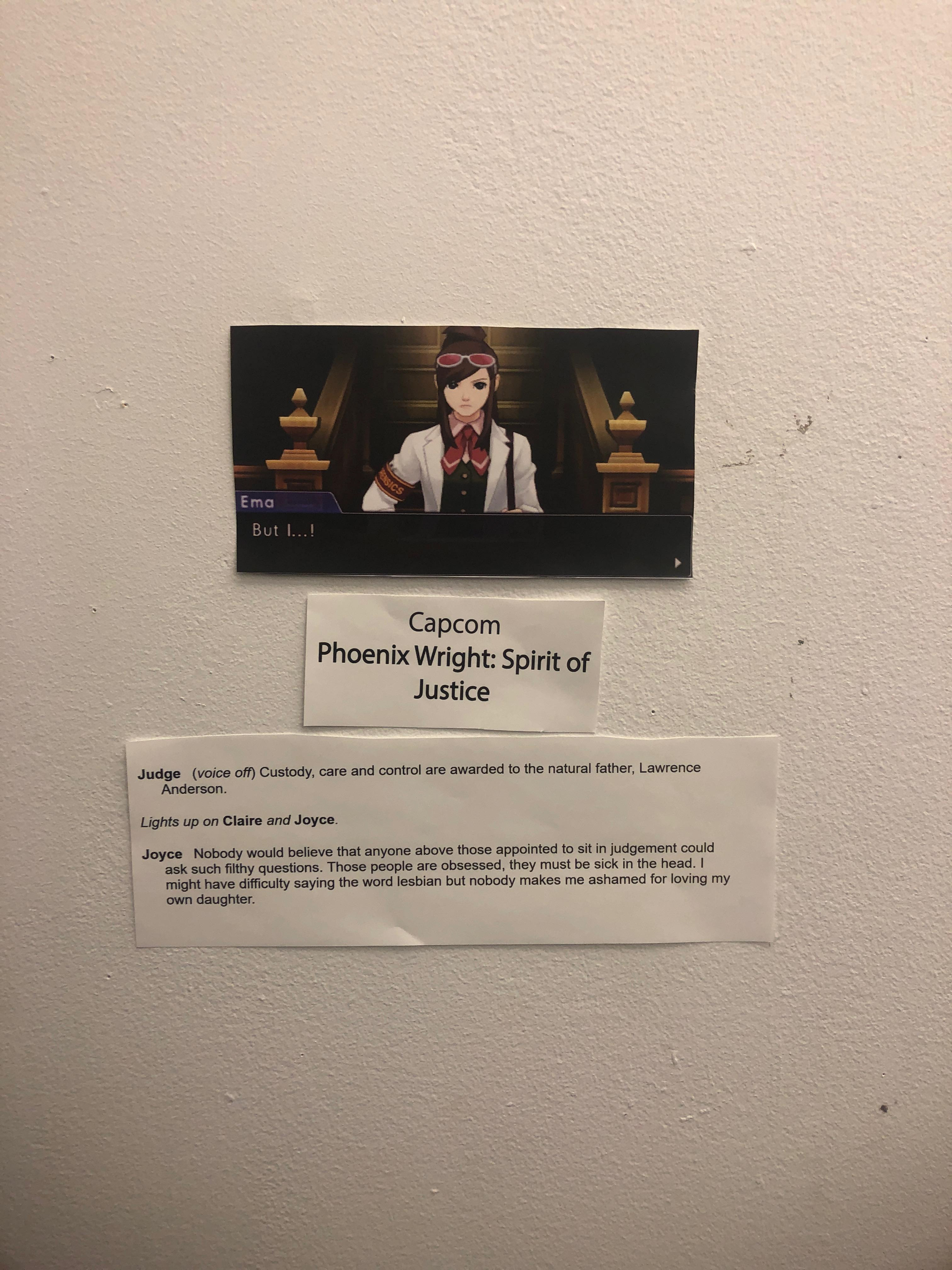 Prototype 1 - Artifactlove
To create my first artifacts that were counterfactual, I just wanted to think about what games were not doing so I looked into other queer literature that I liked to see how it would compare to games. I looked at The Torch Song Trilogy, Hilda Raz's Trans, and Cori Thomas' When January Feels Like Summer. What I really liked about these stories, were the interpersonal and intrapersonal conflicts happening within greater systemic issues. Many stories in games focus on macro-level conflicts that need to be resolved, but what I found compelling about these queer pieces was the understanding of system-level macro problems, and connecting on a community level to make changes within that system. In games, systemic or macro problems are just something for the player to conquer or overcome. There is not even a desire to reflect reality in many big budget games, but instead refract it to fit a dominant player market in order to ensnare them within playspaces.
I ended up taking excerpts from these texts and more (poetry, songs, and others) and then juxtaposing them onto screenshots from games, in hopes that a gap would be filled between the two, and a counterfactual game history could be made. No one really felt the connections between the text and the images, and instead everyone just said, "I don't really play video games so this doesn't make sense."
However, I also included a video of Assassin's Creed: Syndicate juxtaposed with a poem about a trans woman to test video footage in this. When people watched the video, they took time and engaged with the content between the video and the text. This made me realize that I needed to use more engaging content if I wanted people to consider my counterfactual game artifacts.
Prototype 2 - A Court Case and A Hookup
From this initial prototype I decided to experiment with videos to see if people would have similar reactions to different content. However, instead of continuing with the gallery format, I attempted to create work that was entirely within the games. To create these "counter-factual" games I found games that were dialogue heavy were easier to create modified versions of because I didn't have to go directly into the code.
For this prototype I used two games that I used screenshots of in the previous exhibition, Ace Attorney: Phoenix Wright and Uncharted 3.  In the video of Ace Attorney: Phoenix Wright a gay mother is fighting for the custodial rights to her child in court. In the Uncharted 3 video, I specifically chose the intro to the game because of its loaded visual masculinity. This scene includes Nathan recounting a hookup he had in a gay bar years ago in London.
↑Back to Top